So here’s a question from a reader:

“Now, I’m curious about Lukas in Shadow of Valentia. I’ve been hearing from people who witnessed his Japanese dialogues and have mentioned that Lukas is more polite and less sarcastic? I’ve been told he’s nicer and more emotional. Is this true?”

Today’s post I compare one scene in particular (requested by the above reader), but there are likely other good candidates to show the differences. 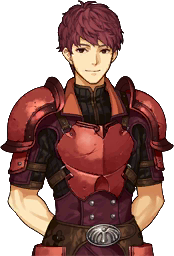 When Alm and his group meet the Deliverance and get into a discussion about leadership and recruitment with Clive and Fernand, the following exchange happens:

Note: The above translation takes liberties to retain meaning but have better flow. See “super literal” translation in the references for a better idea of a more exact literal meaning.

You can already see a great difference. One stark contrast between the two Lukas’s is that the Japanese one can retain his calm even in Fernand’s hostility. At the same time, he can still deliver what he is trying to say with enough bite.

In English, the conversation is rather heated, and Lukas makes a rather impassioned stabbing remark to Fernand’s own hostile outburst. They both seem rather heated, though have different ways of expressing it. But the localization emphasized “must” using capitalization, for instance.

In Japanese Lukas retains a very formal tone and often remaining calm in what should be an impassioned argument serves to further infuriate the already infuriated party.  It expresses a confidence that can come off as arrogance, but in this case it just makes Fernand look worse with the stark contrast.

You can see the localization took the formal tone to be more of the sarcastic sort. It is believable in one sense that keeping a tone that makes one appear to be on “higher ground” than someone else may come with the air of being condescending. The above example showing one instance of this.

I had played through the game only in Japanese (in contrast to previous games where I had also played in English afterward for direct comparison), so only have isolated lines of his in English that people have given me, of course. But I can comfortably say in Japanese that he did not really have too many moments that could come off as strongly or as pointed as his English depiction.

On an interesting note, in a Nintendo Dream interview I translated, the developers even bring up this same matter:

Q: Incidentally, it [his Fire Emblem Heroes profile] says that Lukas is a sharp tongued cynic?*

*TN: In English, it was translated as “Sharp Soldier.” In Japanese, it’s “ルカ: 穏やかな皮肉屋 , or “calm but sharp-tongued/sarcastic.”

Kusakihara: Regarding Lukas, at the start [of Echoes] he says things such “washed up” about Mycen, for instance.

Q: Is that where it [the description] came from?

Kusakihara: It probably got expanded upon from there. He was originally designed to be polite but with a sarcastic side, but ended up not having many opportunities to be sarcastic in the game itself. (Laughs). I think he would say some pretty nasty things to those who act arrogant in front of him.

So the developers did intend for him to be that way at first, but ended up with not giving him many opportunities to be such. Considering how Shadows of Valentia marks the game with the least amount of time between Japanese and English release in the series thus far, and it is safe to assume the localization was working in tandem with the Japanese development.

It is very possible they had the earlier personality in their mind already if they were there during development, and may have based his character around the intended aspect.

Localization has a habit of needing to “punch up” certain character aspects. Someone like Python becomes an eccentric and flamboyant individual for instance. Or, how the duo of Tobin and Gray, as well as Mae and Boey, talk to each other in both languages with their respective personalities much more contrasted in English than Japanese. Japanese has so many of its own nuances that may be hard to express in English and vice versa. As such, localization tries to emphasize certain traits to individualize people in their own ways they see as fitting, and that they feel best expresses a character. It’s hard to strike that perfect balance, but when it happens, it comes with great results.

Of course, it’s possible they also wanted to add their own liberties to what they saw as making for a livelier world and interactions. Not a bad thing for many, as it has been well received from what I see. In fact I haven’t met anyone (non Japanese) who prefers the Japanese version… but this makes sense, after all! It’s called localization for a reason! What matters in the end is the overall intent and meaning comes across.

But for people like me it’s all about the little (or sometimes, big) things that get lost in translation. Sometimes it can’t be helped, and that’s why we’re here to do our best explain it to those who are interested. : )

So, to answer the reader’s question: Yes, he is nicer in Japanese, and that dialogue above is indeed much more heated and exaggerated in the localization. He can remain cool with people like Fernand, even. “More emotional” may not be the best word choice, as that can include passion in the heated sense. One could say he is more stoic, yet compassionate, as this scene shows with his less hostile defense of Alm and leadership.

Lukas is certainly more “punched up” when it comes to sarcasm and pointed jabs in English. In Japanese, he remains polite and very formal. However, the developers noted that he was to have a sarcastic side that didn’t end up having many opportunities to shine. So it is very likely the localization  implemented and “punched up” this trait of his to give the Lukas those in the west know –in contrast to the more maternal one we ended up with in Japanese.

Here is a super literal translation of the Japanese dialogue to give you an idea. Note this is by no means how it comes off to people who read Japanese, and (I would hope) no translator would ever translate it this way. It is purely for meaning reference. Do not use this as an example of “what the literal translation would be like.”

Lukas: Alm isn’t a knight like all of you, but his abilities are certainly not inferior. Clive’s leadership is at its limit, so a new leader may be good.

Lukas: I’m stating the truth. Friends I fought with for a long time were at the south fort. The way we fight now is not the best one, I think.

A note I want to make on Fernand’s line: I am often reluctant to use insults like “bastard” in the place of Japanese words like 貴様 (kisama, an intense form of saying you … that nobody actually uses in real life, and is often reserved for anime and video games, and often translated with some swear word or another). There aren’t actually really any intense words like English has in Japanese… it’s more about the tone. So localization took that “hostile” tone and combined it with the “That’s enough out of you” (or, more literally, “keep that mouth shut”) to arrive at “I’ll rip that tongue out.” Pretty creative way around it!

So what did you think of the contrast with Lukas? How would you have handled this scene? Which version of his character do you like better? Let me know!