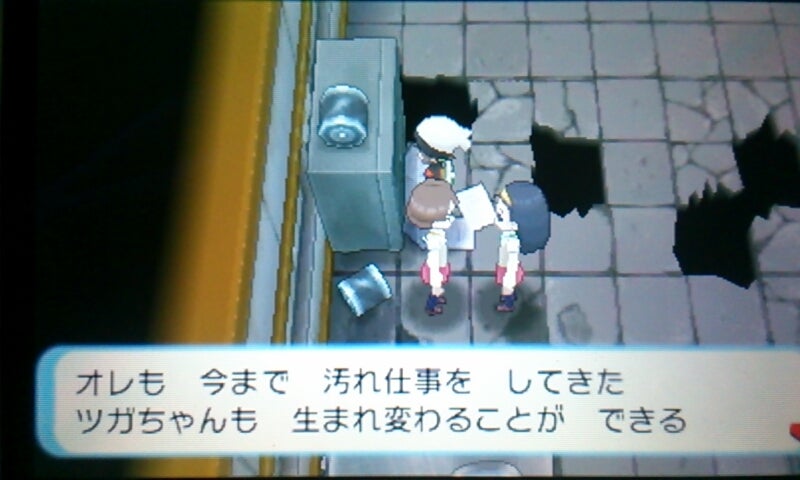 Part of a series on game comparisons! Last time we looked at a certain Nurse at the Battle Maison in Pokemon X/Y/OR/AS.

“In [Pokemon] OR/AS, there’s this locked room in Sea Mauville that has two girls in it for some reason, and the internet went nuts thinking all sorts of dirty thoughts over the simple dialogue the two share. I don’t see what’s so sexual about it, but I attached it below. Was it more suggestive in Japanese or something? Idk what’s going on. Thanks!”

I vaguely remember this part from the game, I didn’t really think much of it at the time, but upon searching the line I do see a few threads here and there suggesting potential innuendo behind it. So what’s going on here in Japanese?

The following conversation takes place behind a locked door in Sea Mauville:

Girl 1: Wha— How in the world did you get in? I locked the door… All right. You want this, don’t you? Take this!

Girl 1: I was teaching this girl how hard it is to be a Trainer!
Girl2: …Blush…

The “how hard it is to be a Trainer” line seems to have sparked some lighthearted threads on how suggestive it came off to some (and not to others). The blush is what seems to have made people lean that way. It led to some fan art, even (though none that I will link to here, but found easily enough with a quick search!)

Girl 1: Wha…how?! I locked the door and everything… Fine, I get it! You want this don’t you? Then take it!

Girl 1: I was just teaching this girl the hardships of being a trainer!
Girl2: ……Blush

As you can see, the dialogue is basically exactly the same. The localization for these games are rather spot on.

The Japanese for “blush” is “ぽっ“. It doesn’t mean “blush,” but rather, is an onomatopoeia of the sound used for blushing in images and such. The localizers simply wrote it out as there was no real equivalent to express it otherwise. How would you write the “sound” of a blush in English?

When I saw this myself, I figured it was just more “senpai/kouhai” shenanigans. Senpai (upperclassmen) and kouhai (underclassmen) share special relationships in Japan with a strict hierarchy and respect from kouhai to senpai. I’ve personally seen some rather interesting senpai/kouhai activities (i.e. a senpai forcing a kouhai to do sit ups while they sing a national anthem for a music club), but in media it is often exaggerated to the point of things like romance between the two.

Romance is not exactly explicit in the dialogue here, as it could be what I described above. The blush could be out of simply embarrassment of being seen (shyness is not unheard of at all).

However, those are just possibilities. On the Japanese side of the net, many of them (more than the west, even, I’d say) actually took it as a senpai x kouhai romantic situation too, or just generally bizarre. The locked room at Sea Mauville (out in the middle of nowhere) with these two in there saying things like that was enough to drive their imaginations wild.

A few out of many silly examples:

(Just what were those two girls in a locked room in an abandoned area up to…? <Links to a page on “girl’s love”)

(It was so strange, and of course I thought dirty things…)

Both sides laugh it off for the silliness that it is, in the end, which is how it should be treated. The original dialogue presented something that could be taken the wrong way, and the localization preserved the equal vagueness. It works out greatly on both ends!

The localization was no more or less suggestive than the original Japanese dialogue. They retained the meaning and vagueness of whether this is meant to be innuendo between a senpai and kouhai or just dialogue that is taken the wrong way.

I will continue to look at fun differences between the versions of sorts of games when I get time!  This reader actually had a few other things to look into (an entire list, actually), so expect to see some more from the 3DS Pokemon games in the future.

Any dialogue you’re interested in? Feel free to send in comments or via email!

5 thoughts on “Pokémon OR/AS: “I was teaching this girl how hard it is to be a Trainer!” [JPN vs ENG]”