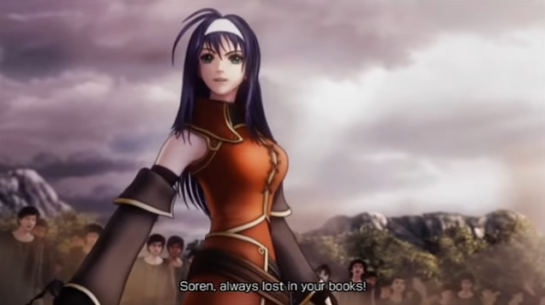 This post is part of a series on reader requested (and personal curiosity) comparisons between various games’ Japanese and English scripts.

Today’s post was a request by @LeKanehi, and is about Mia’s line from a cutscene in Fire Emblem: Radiant Dawn.

Please be aware there may be spoilers as always when discussing context. Let’s take a look!

For context, either refer to the video below or my summary line right under it:

Basically, the Greil Mercenaries make a reappearance. Soren is casting a spell, a soldier decides to target him, but is ambushed by Mia before he gets a chance. She then says the following lines: 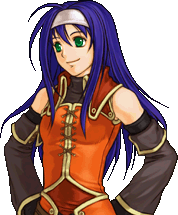 So you can already see a pretty big difference! They are completely different lines. So why may this be the case?

First, it may be worth noting this is the first time Soren and Mia both appear in this game. Fans would already be anticipating where these two popular characters from the previous game may appear. As such, in Japanese, this is meant to serve as both their introduction to new fans (who came in to Radiant Dawn without playing Path of Radiance), as well as their “anticipated reappearance” for fans who did play the previous installment. However, the line leans more toward “anticipated reappearance” likely with the assumption that people already know who she is.

I bring up this note so we may begin to understand the original intent. Mia’s line in Japanese thus comes off with a “Hey guess who’s back?!” kind of vibe in line with her sword loving personality. (In fact, the rest of the video is arguably a “guess who’s back” with the Greil Mercenaries as a whole).

Now in English, we see that she’s addressing Soren. Soren has no spoken lines, so saying “always lost in your books” serves to inform the player of Soren’s personality, and “What have I said about watching your back?” would make Mia appear to be a supportive character/good team player. It also gives some rapport between these two characters who otherwise are never seen interacting with each other.

In English, the lines can come off as more “informing newcomers” compared to the original Japanese. If you include the starting of the cutscene with the archers (Shinon and Rolf) in the tree, you see that one can already figure out their personalities/roles from the brief conversation.

However, that does not discount that the English lines do work as a “guess who” with Mia casually saying things like this on the battlefield to Soren. It also gives a sense of camaraderie (in words) opposed to the Japanese one which is camaraderie (in actions).

But the casual chatter on the field serves to carry a similar intent to the original Japanese, in a way. One just features her casually talking about herself, the other about Soren. But she’s still casually talking! So there are similarities in that sense, as opposed to her being completely serious about something when she was rather casual originally.

The next consideration is that this is an animated cutscene. The liberties that can be taken in text translation are thus severely limited as now there is timing and synchronizing that has to be considered in addition to content. My literal translation above has the advantage of being presented as text so I don’t have to worry about fitting it with her gestures and mouth movements. Though, one could still rejigger the literal translation a little to make it fit perfectly if they wanted to.

So it’s not entirely a synchronization issue as any translation could likely be fit in with proper word choice. Thus, with the movements and especially context of the scene (as well as meta context), perhaps the localization felt it better to present her with the lines they did rather than the original Japanese lines. It had to be a very conscious decision to thus change her lines. Perhaps they felt it was more fitting, for whatever reason.

Also, she’s actually one of the few characters who got a voiced line for being relatively minor when compared to other characters who get voiced. Which leads to the final point: aside from this cutscene, Mia only has a few other lines in the entire game. It’s a general drawback of Radiant Dawn‘s characterization, meaning this line is just one of few to make her character stand out to newcomers. Unlike other characters, however, she does have Path of Radiance and its support conversations and the like to better explore her character. This is an advantage other characters don’t get. Perhaps this was a factor why the localization went with what they did, too, figuring her love for swords (and dueling) would be shown in her brief conversation later on, where as in Japanese it may be more redundant (a love for swordsmanship here, a love for it there).

Regardless, we will likely never know the real reason behind the change! It’s a small line though and quite inconsequential in the bigger picture, compared to some other changes that occurred in the localization of the game.

In the end, they likely realized a fan that is already euphoric at the return of the mercenaries wouldn’t care what she’s saying, just that here she is saying anything at all!

The lines are completely different. In Japanese she gives more of a “guess who’s back?” vibe to fans likely played FE9 before this one. In English, she gives more of a “first introduction” vibe that also works for familiar fans. Line synchronization isn’t an issue as any translation likely could’ve been worked into the scene, so we can conclude that it was a purposeful decision to change the line, though remain unclear as to why it was changed. They both work in their own ways, but do portray two different sides of her character.

For contextual reference, this is the scene in English and Japanese (specifically at around 1:31 for both videos).

For reference and those curious, this is the super literal meaning of what she said.

Alright! The perfect form of this sword is something I’m completely charmed by!

From this, you can see how I ended up on:

Oh yeah! My sword’s in perfect form. I’m totally in love with this style!

She is complimenting her own perfection of the sword, specifically the skill. While she does not say “style” specifically here, it was the best word to use (as “in love with this” is too vague, “in love with it” may mean the sword and not the skill, etc). I tried to keep it to the tone of her generally localized character, too.

“I think I’m totally in love with this style” would work nicely too, but the “I think” can be a little awkwardly in this line for this scene, in my personal opinion.

(Update 8/29/19: Alternatively, looking back, “Oh yeah! My sword arm’s pretty enchanting in its perfect form, if I do say so myself!” may work better for a literal middleground here, but the point of the article still stands!) 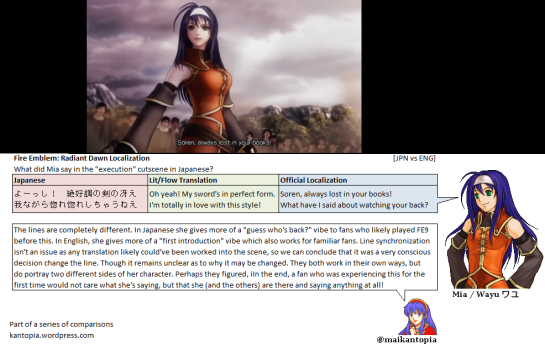 It’s amazing how much time I spend talking about pretty much nothing, huh? But that’s the beauty of trivia and looking at all the small things.

Which did you like better? Her and her sword? Or her and her Soren line? Leave a comment below!

And if there are any other lines you’re curious about, let me know!

6 thoughts on “FE10 Radiant Dawn Localization: What did Mia say in the “Execution” Cutscene? [JPN vs ENG]”