Spoiler warning: This article involves info about a B support conversation in Three Houses.

So there’s been news circulating around a line in Bernadetta’s English B support conversation with Byleth, and how it appears to be altered from how it originally appeared after an update.

So fire emblem decided it would be a great idea to censor Bernies support conversation in the last update, for seemingly no reason at all. Baffled at why they did this, the game was already rated and her character was handled really well, makes no sense. #FireEmblem pic.twitter.com/d1iArVdcwG

A thread on serenesforest by user Jedi also brought up this issue.

I was curious if the issue really was about potential “censorship,” and whether it was a case of the original Japanese having changed too (so the English changed with it), or if it was just the English that changed (to tone it down or alter it significantly).

The surprising result is… that the Japanese is the same as it was before, and that the new English ends up oddly closer to the (literal) meaning of the Japanese! Though with some subtleties lost, as may happen with literal translations.

First a side by side of the text. (Please refer to the “reference” section of this post to see the reference images used).

Note that the JP text did not differ before or after the patch:

First things first. I show the super literal JP here. You can see I wrote to/and since it can be either:

I also wrote “discipline/train” as 躾けられて can go either way. The use of passive voice means it was more of an unpleasant experience, so the connotation of discipline may work better, but train can work too.

And a final note, on “とにかく良い相手と結婚しろって”, I had inferred “make me a good partner for marriage”, but this line can be “all in order to marry me to a good (in the sense of well-off) partner”. I had inferred the “me” from the training, and the imperative form “しろ” puts heavy emphasis on this objective. The “って” is a quotation note as well, so could be the father saying “we’ll wed you to a well-off partner!”

With that in mind an alternate even more extreme literal translation would be thus:

“I’d be drilled by being tied to a chair around the clock, ‘we’ll wed you to a well-off partner’ he’d say…”

Though the above may read differently from the new English result, I would say the ideas (trained by being tied to a chair to be a good wife) still stand here in this literal translation, for the greater point of this article to point out that it may not have been the idea that was a problem worth “censoring” and the like.

Now then, the pre-patch English has words like “good, submissive wife” and “challenging me to stay quiet” which is nowhere to be seen in the JP. But when we look at the post-patch English and the omission of these words, we see it actually comes back to being a lot like the original JP. Of course, some things like “around the clock” (or “all day”) are missing too, which shows the severity may have been toned down in the new English.

The general idea — that he would tie her to a chair to train her to be a good wife, still remains, as does that intent. That is indeed the exact idea that was being conveyed. It was the original English that was actually more “punched up” and thus toned down in this patch, matching it back to a more vague literal meaning, rather than presenting one (i.e. localizer’s) interpretation. That “challenge” line especially would qualify as something that one may not have imagined from the original subtext.

One thing that does get lost, however, which I briefly mentioned as “severity,” is Bernadetta’s implied “feeling” on the matter in JP. The use of passive voice among other subtleties is likely why the localization decided to “spell it out” originally. Adding the words and details would enable an English reader to read the situation as she felt it, rather than leaving it to the imagination. English may not be able to convey that kind of indirect feeling the same way, so this was probably a good choice on localization’s part.

It seemed effective too, as many hearts melted for Bernie at this line and her hardship.

The new English, while more accurate to the literal meaning, does lose out on this more emotional side. The content is the same, but that subtlety that was spelled out is lost.

It actually ends up coming up a little awkward in English. If one was unaware of the original English or Japanese, reading: “To train me to be a good wife, he’d do things like tie me to a chair.” may come off as odd (i.e. “tying to a chair” = “training to be a good wife”?) The ideas, or line, may seem a little weird now.

So… censorship? I don’t think as far as the original idea was concerned that it was really “censored” in the sense of the idea being changed. The word would be used too loosely for this situation, I think. Her dad still tied her to a chair indeed, to train her to be a good wife. It’s still pretty horrible. Just a bit less in-your-face horrible.

I feel “censorship” would take more of the following forms in this case (in order of increasingly severe):

1. “He would teach me how to be a good wife” (very little of the original idea remains, the harshness is completely gone)

2. “He would talk about the ideal wife” (Very toned down, almost more “civil”?).

3. Changed completely to be a conversation about how Bernie is sad that her latest artistic masterpiece caught fire, latest cake overcooked, or that she lost an archery contest and knew she was worthless, thus tying it back to the idea that she locks herself in the room. (They may seem like extreme examples, but I think it helps convey the kind of alternatives localization could take).

4. The conversation is omitted entirely.

So was it toned down? Certainly without that subtle emotion that was spelled out in the original localization, it would be. But again, literally, it’s actually made quite similar. I think the main points remaining show it wasn’t the original idea that was potentially controversial, necessarily.

The big mystery to fans, and myself included, is why they would go from that original, more emotionally invested description to one that many may deem inferior, or even more awkward.

I think part of that awkwardness may stem from recycling voice lines from the original write-up, so needing to make the new sentence also account for words that were used before? But I have not actually listened to the audio of the English support to verify that.

However, fans point out Bernadetta’s character remains in tact, as do the events that transpire, just with a bit less of an emotional impact (made obvious with the in your face approach) and more as a background, relying on reader imagination. Some fans welcome the change, others do not.

There are murmurs that it may be due to ratings in places like Australia and the changes thus having to change to match worldwide, but, I am not qualified on such matters, nor are international ratings, standards, and policies something I really have much knowledge of to comment on. In those cases I am sure it would be “censorship” in a different way of the word that I mean. But I do not think it was “censored” in the sense of what I presented above.

It does make one wonder, though, if changes are to be made to be closer to the original, will Sylvain’s C Support with Ingrid change too? But that assumes that was even the change’s purpose in the first place.

I want to clarify: It is unlikely the change was made to become more like the original. The way it was expressed it perfectly fine. So there are likely other factors at play. Unfortunately, those factors are what remain a mystery. But it is unlikely an issue with the general idea that was being conveyed.

The English text changed from a more emotionally charged and descriptive line to a seemingly more plain one after the patch. Surprisingly, it is not a matter of changing the translation to be different to the original JP as “censoring” may imply, but, quite the opposite! It became quite literally the same as the original’s idea.

It does however seem “toned down”, such as omitting the severity of the training or Bernadetta’s subtle emotional feelings on the matter that are implied/indirect in JP and difficult to convey in Eng, but I think enough of the idea remains to leave it to one’s imagination and not really be considered “censored” (in the way one may imagine when reading the word). It does come off a little more awkwardly in English, however, as one may be confused as to how simply tying her to a chair constitutes as training for being a good wife.

However, given the above, the reason behind this change is quite the mystery! There was little controversy that I am aware of in the original form, and made people feel more for Bernadetta as far as I know…

Whether or not that’s a good thing, or whether it was necessary for whatever reason, that’s up to you!

It is important to emphasize the following as I really want to avoid being misunderstood, especially since I see the article being cited and want to ensure I am not misquoted:

Original English (from above link):

New English (from own screenshot): 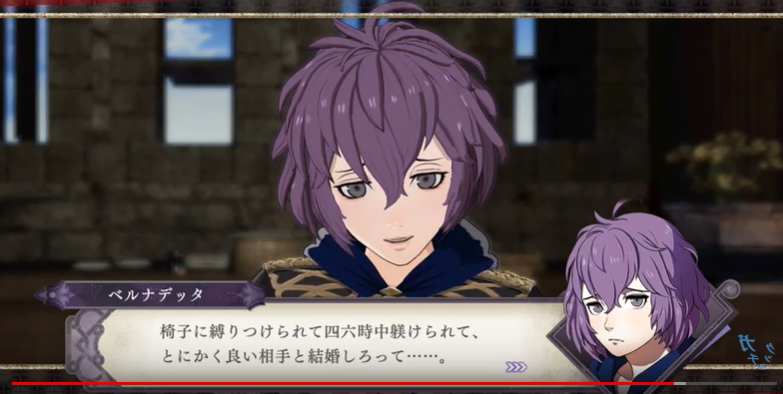 So what do you think of all of this? Which do you like better? Let me know! I found it pretty interesting that the text ironically changed to be more like the original on a literal sense and lost some of its charm, but perhaps there are those who may prefer it that way too!