Today we look into what a reader brought up as part of a larger discussion of localization of the FE games:

Idioms tend to lack perfect equivalents in other languages, so what of Ranulf’s use of “fish out of water” in his Ike support in PoR?

They are referring to Ike and Ranulf’s C Support in Path of Radiance, where Ranulf says the following:

Then again, worrying about a beorc like this is definitely not normal laguz behavior. I guess I’m a fish out of water myself… Wait, did I just call myself a fish?

Short answer: Surprisingly, this idiom was rather well placed. He was still talking about being an oddball when it comes to laguz, and using imagery of floating on water like a fish in Japanese. 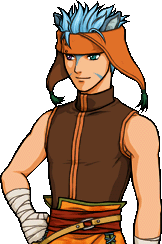 For context, you can read the full C Support conversation here.

Below is the relevant portion to discuss:

So we can see how the content differs slightly. Most notably, Ranulf does relate himself to a fish, to fit his image of “floating above the laguz.” This sounds really awkward, but I presented this literal translation to show how he got to the mention of fish in the first place. The word in Japanese he uses is 浮いてる (uiteru) which has many meanings. Primarily, it means “floating”, but it has another meaning for “[being] out of place,” which he was likely using given the context.

“Bloop bloop” comes from ぷかぷか (pukapuka), an onomatopoeia of floating (on water), I went with “bloop bloop” just as a rough equivalent in English. Ranulf was describing this “floating” pun (with “being out of place”) to Ike and himself floating above the water (water which is the beorc or laguz).

The add-on “as an exception” is how one may go about translating the “out of place floating” from earlier clearly to one simply reading the already awkward literal translation.

So now for the idiom in question. “A fish out of water” is an idiom that refers to “A person who is out of his or her element.” In this case, Ranulf talking about how he (and Ike) are exceptions to the usual preconceptions of the beorc and laguz (as far as he is concerned). Given the context in Japanese, this was actually well used, as the pieces were all there. Ranulf was using examples of being a fish that floats and sticks out as an exception, so the localization likely took the opportunity to use such an idiom (that would also save space in expressing Ranulf’s idea).

It ties back to Ike still being amused by Ranulf relating himself to a fish, as a cat in the end. It conveyed a similar enough intent in meaning while adding to the flow in English.

It’s an example of great localization!

Other notes and observations:

Some other small tidbits one can see in this conversation:

The “fish out of water” idiom is unique to localization as expected. Surprisingly, however, all the building blocks for its use were in the Japanese. From Ranulf relating Ike and himself to being exceptions to the laguz and beorc by “floating above the rest…like a fish” enabled the idiom to express its usage as intended for better English conversation flow while preserving the intended meaning –even if we did not get the fun “bloop bloop” sounds in the process!

I will continue to look at fun differences between games. Any dialogue you’re interested in? Let me know in comments or via email!

6 thoughts on “FE9 Path of Radiance Localization: “I guess I’m a fish out of water myself…” [JPN vs ENG]”