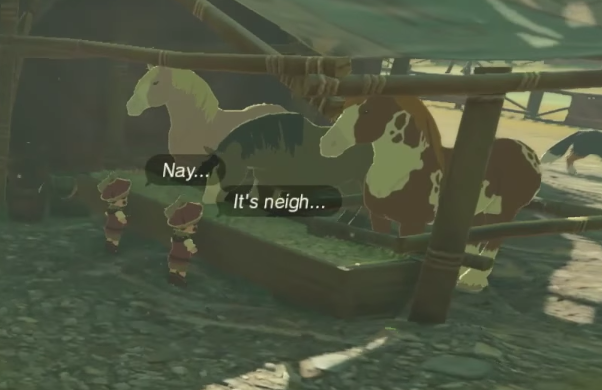 The section question regarding Legend of Zelda: Breath of the Wild comes from a reader on twitter.

It is a very simple one. “What do the two boys (pictured above) say in Japanese?” They are found at the Dueling Peaks stable during the day, for reference.

It is a good question as the joke in English revolves around the English specific “neigh.”

So there is a slight difference here. From my literal translation, you can see the two boys are actually arguing over what sound a horse makes. In English, it sounds more like one just made a mistake and the other is correcting them.

In Japanese, the onomatopoeia for horses is “hihin” (said like hee-heen). This is funny, since the first boy (on the left) was correct then, as “buhin” (boo-heen) is not really a sound horses make in Japanese. But in English, he (on the left) was the one who made the mistake from the conventional spelling and the boy on the right corrected him.  Who is right and wrong is basically reversed between the regions.

Perhaps it is because in English, one reads only left to right. In Japanese one will be drawn to the speech box on the right first and then move left. That is an easy explanation for why it may have worked out that way!

So, in short: The discussion is still about what sound a horse makes. But in Japanese, the two boys are arguing, where as in English, one is correcting the other. The order of who is right and wrong is reversed.

Sorry I’ve been so busy lately! Full time job and such as I announced. But comparisons and translations remains my greatest passion, so you can bet I’ll post when I can!

Please feel free to leave comments/suggestions below! See you next article!

2 thoughts on “Breath of the Wild: What was the “neigh” scene like in Japanese? [JPN vs ENG]”