The section question regarding Legend of Zelda: Breath of the Wild comes from personal curiosity.

So in the Gerudo Town in the game, there is a woman who sells sand seals. She makes quite a few puns (as seen on the image at the top of the page), and so I’m sure many were curious at what that may have been in Japanese.

So this is a thing you see often in Japanese media. The literal translation appears incredibly lame and makes little sense, and this is often why localization opts to utilize puns instead to convey a meaning as there is no exact equivalent in English.

So what the woman does is end most of her sentences with “zarashi.” I bolded every instance on the table above so you can see how often the characters ザラシ (seal) appear. The blue highlight is to show the actual time she’s referring to the sand seal itself, rather than just saying “seal” over and over again.

This kind of repetition is just a silly way of emphasizing things in Japanese as a character quirk. A character who comes to mind immediately who does this (though I don’t recall if the localization opted for puns) is Taupy/Toppy in Sands of Destruction. He has a tendency to end all of his sentences with the word kuma (which means bear). It serves the same emphasis as a silly quirk a character has. 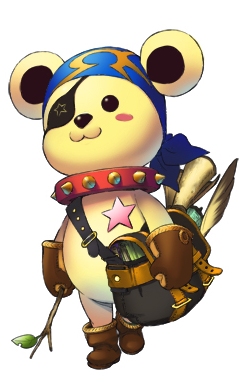 Another that comes to mind is Zero III from Virtue’s Last Reward (of the Zero Escape series). They make all sorts of rabbit based puns in English. And, as expected, in Japanese they are actually just ending their lines with usa (short for usagi, or “rabbit,” in Japanese).

These are just two examples that come to mind immediately. It’s more common than you may think! Especially among anthropomorphic characters in Japanese media.

In this case with the Gerudo, it’s likely because she’s a saleswoman that she’s imitating this kind of structure as her sales quirk. Thanks to the above two examples, the moment I saw these puns in English, I figured this may be the case. Seems like I was right!

Oddly, the Gorons retain the tic of saying goro. However this may be because they are not exactly human, nor is there any actual existing animal equivalent to what they say…

Interestingly, if you select the first option, the repetition continues in Japanese. However, the puns in English stop there. Seems they only decided to be punny for the initial dialogue and options.

This is if you select the first option where she talks a bit more about them. You can see from the bolding that the Japanese continued on with the repetition, but the English did not continue with the puns here.

The Gerudo makes puns in English as there is no exact equivalent to the Japanese “animal name” repetition character quirk. This is more common than one may think too! Next time you see someone making animal puns in Japanese media (especially if they appear to be said animal), you can safely assume the original Japanese featured this structure.

This was pretty fun to look into! Have any other examples of characters that use these sorts of puns in English? Any others you know of in Japanese that use that repetition structure? Let me know!

Please feel free to leave any other comments/suggestions below! See you next article!

5 thoughts on “Breath of the Wild: How do those sand seal puns work in Japanese? [JPN vs ENG]”